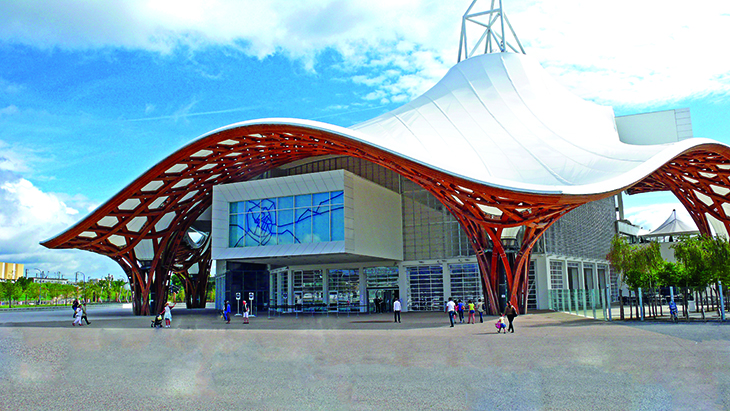 The roof of the Centre Georges Pompidou Museum in Metz (France) comprises of 16 km of glulam. It represents a 90-metre-wide hexagon with a surface area of 8,000 square metres. The glulam motif forms hexagonal wooden units resembling the cane-work pattern of a Chinese hat.

Glued-laminated timber (glulam) is a highly innovative construction material which (weight-for-weight) is stronger than steel and has greater strength and stiffness than comparably sized dimensional lumber.

Glulam is a stress-rated engineered wood beam composed of wood laminates that are bonded together with durable, moisture-resistant adhesives. The grain of the laminations runs parallel with the length of the member.

Glulam is versatile, ranging from simple, straight beams to complex, curved members. It is available in both custom and stock sizes and one of four appearance classifications: premium, architectural, industrial, or framing.

Stock beams are manufactured in commonly used dimensions and cut to length when the beam is ordered from a distributor or dealer. For non-residential applications, where long spans, unusually heavy loads, or other circumstances control design, custom members are typically specified.

Contrary to general perception, correctly engineered wood can be used in a variety of environmental conditions, with little maintenance, and can last for centuries. In fact glulam is known to offer greater fire resistance as compared to steel beams under the same fire conditions!

Glulam has a reputation for being used in striking, exposed applications such as vaulted ceilings and other designs with soaring open spaces. In homes, churches, public buildings, and other light commercial structures, glulam is often specified for its beauty as well as its strength.

A case study conducted in 2002, comparing energy use, green-house gas emissions and costs for roof beams found that it takes three times more energy and 12 times more fossil fuels to manufacture steel beams than it does to manufacture glulam beams.

It compared two options for a roof structure of a new airport in Oslo, Norway – steel beams and glulam spruce wood beams. The life cycle green-house gas emission is lower for glulam beams.