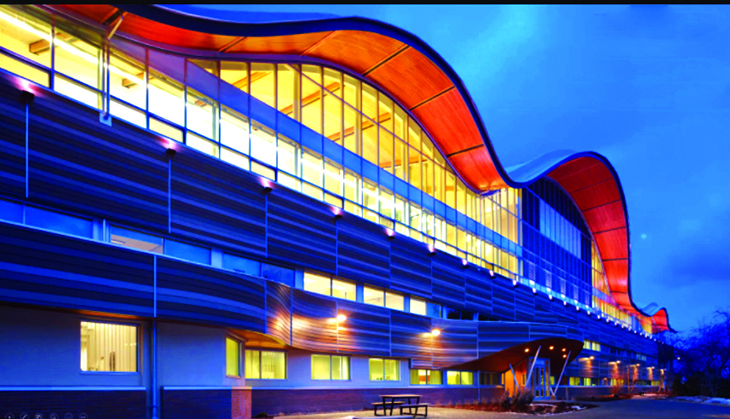 The main building of Thompson River University in Canada is made from engineered mass timber.

Canadian architect and industry stalwart, Mr Derek Newby, was specially invited as a speaker to the event. A LEED-accredited professional and a certified Passive House Designer, he is a vocal advocate for reducing green-house gas emissions in buildings, both through the application of Passive House principles to reduce operating emissions and through the use of timber to address embodied emissions.

The webinar began with specific references to the benefits of building mass timber structures such as wood’s eco-friendly nature, ability to reduce emissions, the fast-paced building process, cost comparatives and so on.

This was against the backdrop of the fact that buildings currently consume around 40% of earth’s resources while 33% of the green-house gases (GHGs) emitted are from such constructions, making it one of the prime contributors of climate change. The speaker emphasised that this state of affairs was unsustainable in the long run.

The necessity of using of engineered mass timber in construction was the focus of webinar and was divided under the following heads:

He also elaborated on the link between pre-fabrication and modular techniques that can help optimise the process in mass timber construction projects. Information on timber composites was also provided.

The highlights of the presentation were architectural case studies and projects in mass timber from Canada, along with a special focus on misconceptions related to various aspects of building with wood – such as durability, fire safety, seismic performance, resistance to insect/mold/moisture and acoustic properties.

Referring to the advantages of building with wood Derek said, “Construction for mass timber projects is more a process of assembly on site because parts are delivered in a highly pre-fabricated condition. Pre-fabrication saves time, sites are cleaner and less labour is required.

“Sometimes foundations are reduced because the material is lighter. All this is possible with detailed preparation and construction knowledge of those in the industry,” he added.

The webinar concluded with an insightful Q&A session. When quizzed about costs of construction using engineered timber Derek noted, ‘There is a perception of higher cost, and while this may be true at times, the reality is that when we optimise the design and account for the benefits, including rapid build time, wood as an option is often more competitive than it is understood to be.”