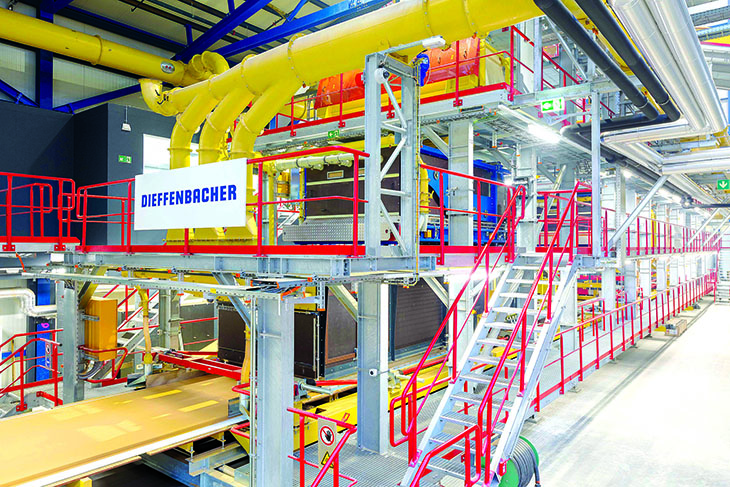 Plant modernization is becoming more important for wood-based panel producers worldwide. Eppingen-based machine and plant manufacturer, Dieffenbacher, is collaborating with its customers on innovative modernisation solutions that can help them keep their plants competitive far into the future.

One recent example is the retrofitting of a steam pre-heater at Pfleiderer’s MDF plant in Baruth (Brandenburg, Germany). The companies’ collaboration led to Dieffenbacher’s EVOsteam technology.

Installed directly at the press in-feed, the EVOsteam pre-heats the mat by injecting steam. This reduces the time needed to heat the mat inside the press, accelerating production.

EVOsteam can also be used in particleboard plants. To boost its particleboard production in the province of Long An, Vina Eco Board Co. Ltd. of Vietnam is also equipping its line with the new Dieffenbacher steam pre-heater.

Vina Eco Board also commissioned Dieffenbacher to convert the forming station of the same line. By installing roller screens in both wind formers, spreading accuracy is improved, leading to better surface quality of the produced boards.

Installation and commissioning of both modernisation projects are scheduled for the fall of 2021.

Another forming station conversion is underway for Pfleiderer at its Grajewo site in north-eastern Poland, where it produces MDF and particleboard. To meet increased demands for particleboard surface quality, Pfleiderer worked with Dieffenbacher to develop a surface layer forming process that satisfies the highest quality requirements.

The special feature is the new forming station accommodating shorter, space-saving wind formers. The project is scheduled to go into operation as early as next spring.

Dieffenbacher also relocates plant components or complete plants for its customers and partners.