Driven by divine design, Anuradha Timber International has given a new lease of life to traditional woodcarvers and temple artisans from Tamil Nadu, for a mega-project on the outskirts of Hyderabad 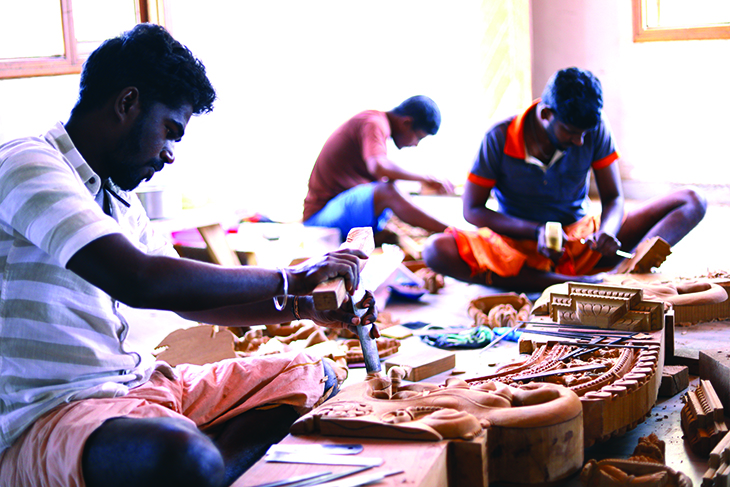 When the Telangana government announced a project in 2016 to rebuild the 12th-century Sri Lakshmi Narasimha temple on Yadagirigutta, Mr Thirupathi Rao, Managing Director of Anuradha Timber International in Secunderabad, felt it was his familial duty to participate in and help bring such an ambitious project to fruition.

Anuradha Timber is a 140-year-old entity in timber trading and a Star Export House led by Mr Thirupathi Rao, a third-generation sawmiller, and his sons, Mr Sharath Babu  and Mr Kiran Kumar.

Apart from trading in the best hardwood timbers from six continents, the family has earned global respect through the several projects involving decking and cladding for luxury yachts made in European shipyards, as well as wood construction and furniture for luxury resorts in tourism hot-spots across the world.

You can read their whole story in the WoodNews issue of November-December 2016.

Now renamed Yadadri, about 60 km from Hyderabad, the sanctum sanctorum is a cave about 12 feet high and 30 feet long. It has deities of the avatar of Vishnu in all five forms embedded in stone: Jwaalaa Narasimha, Gandabheranda Narasimha, Yogananda Narasimha, Urga Narasimha and Lakshmi Narasimha.

But the hillock, spread over 14 acres, is now peppered with several carved-stone temples. The construction of the temples is based on the ancient Agama Shastra, which is being used for the design and architecture of the new temples, intricate sculptures, mandapams (halls) and gopurams (entrance towers).

The project, budgeted at Rs 1,800 crore, is being executed by the government-appointed Yadadri Temple Development Authority, with help from more than a dozen Sthapatis (temple architects). Over 500 sculptors drawn from traditional stone-carving hubs in Telangana, Andhra Pradesh and Tamil Nadu are also on the job.

In 2018, Anuradha Timber was awarded the contract for production and installation for all carved doors, including the main door for the seven-storey-high Maharaja Gopuram, the entrance to the temple complex.

This main door measures 30 feet (height) by 15 feet (width), is 6 inches thick, weighs 7 metric tonnes, and has no linear joints. There are no nuts and bolts for support; only carefully planned and executed wooden joinery!

The other doors are smaller – but many are 25 feet (height) by 4 feet (width) and are 4 inches thick.

An interesting aspect is that all these doors were designed to fit into pre-carved stone door frames in all temple entrances, using special joinery, ancient techniques and local binding materials!

The project was completed and handed over to the Yadadri Temple Development Authority’s satisfaction in September 2019. 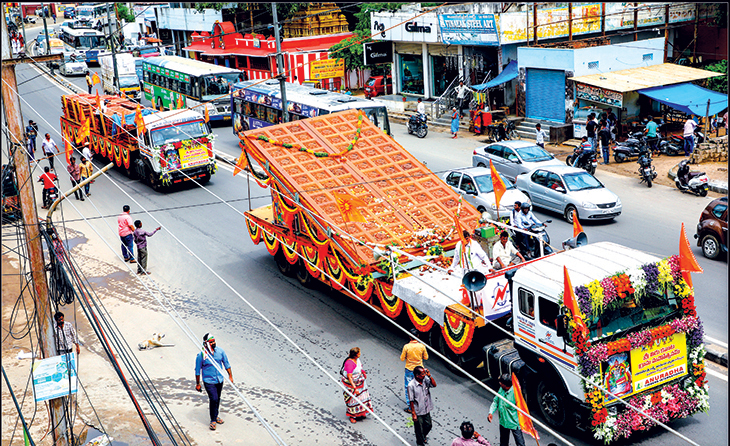 Sharath and Kiran had to do a lot of research on ancient temple architecture and carving of the region, to understand the historical milieu that the doors would represent and the modern socio-religious scenario in which they would be assimilated.

That is how, Sharath says, the carving designs are all their (Anuradha

That apart, the temple authority and its panel of experts had to be consulted, and drawings and designs approved by them before beginning sawing or milling the timber for the doors.

“We had to carefully inspect and work on each log – no knots, no insect holes, no sapwood, no cracks… We finally selected 1,000 cubic feet of good timber and discarded the rest. These doors are made to last for centuries,” Sharath says confidently.

Natural-grown harvested teak contains no sap, has a moisture content of less than 8%, and has natural oil that makes it more durable. “The durability of teak can be measured from several temples in South-East Asia that have endured tropical weather for more than 200 years since they were built,” Sharath notes.

The traditional methods permitted sawing and planning of the logs on modern machines; so that is where the selected timber went. In the end, each door had to take eight rounds of a special Italian wood coating, which itself took 3 months to complete. 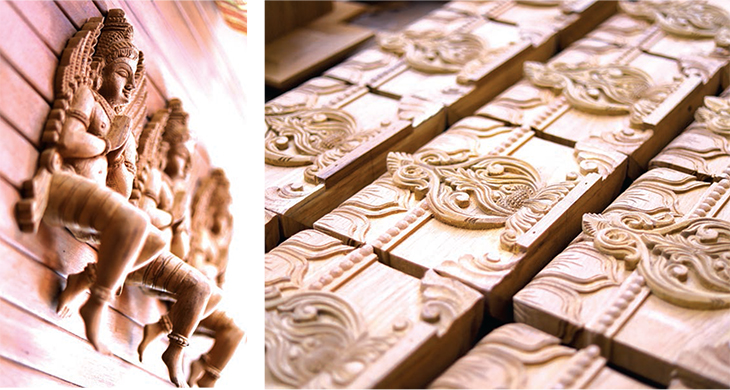 “However, the sanding of all carved work pieces was done by hand; and the chisel marks were left untouched to showcase our artisans’ carving skills,” Sharath says. These craftsmen are traditional artisans from the Rameshwaram region in Tamil Nadu, with several generations in wood carving.

A great many of them have dispersed and taken up other jobs to keep themselves above poverty, and the younger generation is no longer interested in learning or following the traditional skills, says Sharath. That makes these artisans a dying breed of experts.

Following up on their previous contacts Anuradha Timber got in touch with several families, and signed up 100 artisans, brought them to Secunderabad, provided them accommodation, food and salaries to accomplish the temple project.

However, now that the temple project is accomplished, Anuradha Timber has extended their employment. Looking at the flood of inquiries for good and traditional craftsmanship, Sharath says, he has extended his portfolio to secular wooden sculpture in contemporary styles.

Not all 100 artisans stay on in Secunderabad; they return home and are on call whenever their skills are required. There are two family heads who supervise tasks and work rotation.

I sincerely hope this model of work and experimentation works to the benefit of not only these artisans, but also inspires their progeny – and other woodworkers – to learn, survive, flourish and keep some of India’s unique traditions alive.